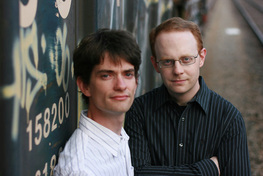 ﻿﻿“Modern, contemporary music has never had such a strong advocacy as this!”
- Jonathan Haas New York University and Juilliard Pre-College

Amphion Percussion (Sean Connors and Peter Zlotnick) has earned a reputation for unique programs and engaging performances across the United States. The duo continually expands and varies its repertoire to include works by compositional icons such as George Crumb, György Ligeti, Morton Feldman, and Steve Reich, as well as transcriptions of music from bands like Radiohead, Feist, the Bad Plus, and Regina Spektor. Amphion routinely premieres new works written for them by emerging composers as well as their own original compositions and improvisations. Both dedicated educators as well as performers, Peter and Sean have given clinics at universities and percussion festivals across the nation on topics as varied as orchestral timpani performance to composing for percussion.

Amphion's name comes from the Greek myth of Amphion and Zethus, brothers who founded the city of Thebes and builders of its surrounding wall. While Zethus struggled to carry his stones, Amphion played his lyre and his stones magically followed after him, gently gliding into place.

Peter and Sean met while attending the Eastman School of Music and later both graduated from Northwestern University. They are now based in Greensboro, NC and Chicago, IL respectively, and travel across the nation to collaborate, perform, teach, and bring new music to audiences throughout the country.    ﻿﻿